Women can write. I'd say almost half of my top ten writers are female. Ann Coulter, Michelle Malkin, Laura Hillenbrand, Candice Millard, Naomi Schaefer Riley, and Karol Markowicz are all thorough, concise, and able to spell names correctly. That doesn't mean the fairer sex generally tends to thrive at writing. Yao Ming and Jeremy Lin could be my favorite basketball players without it meaning Chinese tend to thrive at shooting hoops. The left doesn't understand the concept of patterns and assumes anecdotal evidence wipes out any general observations you make.

Articles written by women are usually all over the map when it comes to making a point. They go on and on without a strong hypothesis and their sources are usually thirdhand. Also, for some reason I can't quite figure out, they almost always spell names wrong (something The Elements of Style lists as one of the great sins of journalism).

Tricia Romano is typical of today's female writer. She's broke and childless with little direction outside what appears to be an ax to grind against those with money and kids, especially white men. These women write about an article a month and get paid 50 bucks for it so I have no idea how they can possibly make ends meet. Romano has a Patreon. The younger ones rely on Dad.

Tricia just published almost six thousand words on my life that she has been working on for over ten years. No, I'm not exaggerating. The mainstream left is furious with her for "giving fascists a platform," but all they did was see nice pictures and a nonthreatening headline and assumed it's a puff piece. It's not. It's the same hit piece they always write about Trump supporters - full of lies, bad journalism, and terrible writing.

I don't want to turn into Lenny Bruce and drag my court transcripts on stage until everyone's bored to tears, so allow me to quickly breeze through the more glaring errors without getting to ten (the ideal number for a listicle). 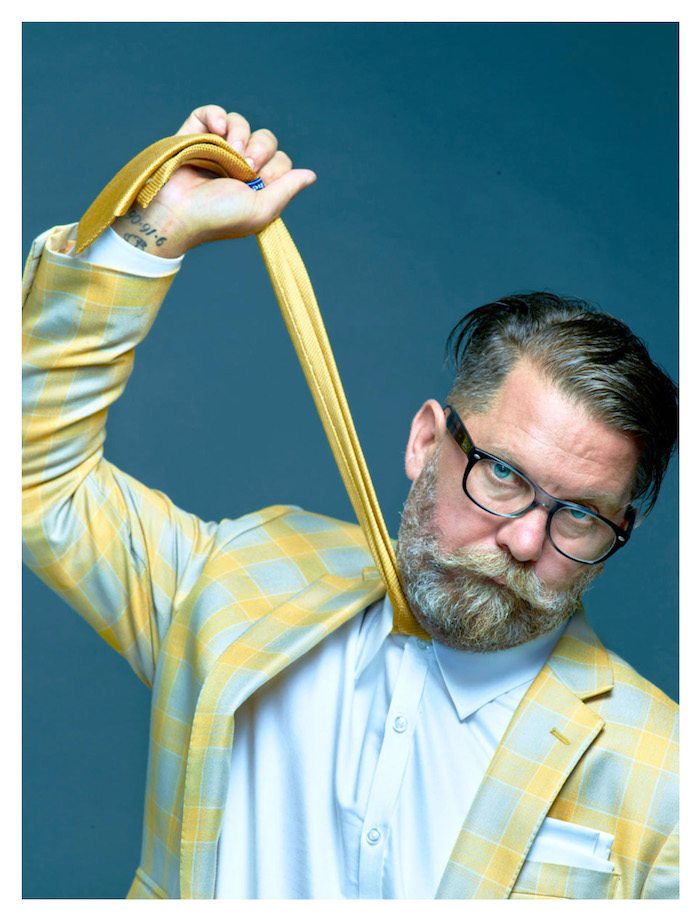 Jill Greenberg photos from the LA Mag article in question

It's only the first sentence and she is citing an antifa tweet and a spurious quote from an ABC News link I sent her. On my old show, a guest was talking about trans and sheepishly admitted she didn't know what the politically correct term for trans people is. She asked me and I replied, "I believe it's 'gender niggers.'" I obviously don't believe that is the politically correct term for trans people. It's a hilarious joke that lampoons all these dumb terms and my apathy towards the left's silly rules is really the impetus of their outrage. Antifa took it out of context and made it a Tweet and that's where lazy journalists get their information.

Secondly, the "shoeless, toothless, inbred" quote comes from an article I wrote about inbreeding within Islam. The quote is prefaced with "Though [hillbillies are] still the left's favorite comedy target, you don't really see that many yokels walking around Appalachia barefoot with a shotgun hoping a feuding neighbor doesn't pop out from that holler over yonder. But the Muslim world is filled with shoeless, toothless..." Get it? I'm saying jihadists fit the hillbilly stereotype more than hillbillies do yet the latter is the butt of all jokes.
Why not go to the source of the quote? Why not have a fact-checker call me before the article goes out? Why not at least try to get it right?

(2) We're barely into 2003 when she describes what my fellow Vice founders were wearing thusly: "McInnes dressed as a skinhead, Smith as a prison inmate, and Alvi as the man they presumably beat up. In the interview McInnes says of Williamsburg hipsters: 'Well, at least they're not fucking niggers or Puerto Ricans. At least they're white.'"

Again, she is using the n-word as a shock button to trigger her readers. In truth, the article in question featured three men in costume. Suroosh was covered in blood and posing as the victim of a hate crime. Shane was dressed as a soccer hooligan, by the way, not a prison inmate. We were British and we were clearly not being ourselves. This interview was quite prescient in that we were predicting the hate crime hoax hysteria the country was about to be consumed with.

(3) "'Maybe that's when I get so much bias in the articles about me, because they tend to be written by single women who are never going to have kids and they resent that.'"

It's amazing she included this quote in an article about me written by "a single woman" who is "never going to have kids" and seems to "resent that."
Note: A writer should never inject a motive or thought process into another person's head. You can't say, "He's jealous." You can only say, "He seems to be jealous." If you're going to say, "He's racist," you had better be damn sure.

(4) "...Pat Buchanan's The Death of the West. Published soon after 9/11, the controversial book argued that Western white culture was in danger of being swamped by immigrants and anti-American leftism." (Emphasis mine)

Buchanan makes it very clear in the book he is talking about WESTERN civilization. You know, the meritocracy that favors people of all races as long as they comply with the American dream. The book is really about the war on Christianity and how it can lead to the "death of the West." However, the author needs to show a path to white nationalism so she just crowbars the word "white" in there.

(5) "'All these alt-right guys are failed comedians,' Oswalt continued. 'They all wanted to be comedians, or they're fascinated with comedy. They hit some walls like everyone when you start off doing comedy, but they immediately metastasized what they perceived as showbiz failure into: 'Well, fuck comedy. And, come to think of it, fuck all liberalism!' And they went right-wing because of that.'"

What a bizarre theory. I was in an '80s hardcore cover band called '80s HC back in 2010. We stopped because it was too much work. Am I a failed musician out for revenge? Is every painter who is not a pro a budding Hitler waiting to take aim at the world for rejecting his art? Stand-up comedy pays $20 a night and requires maybe 10 years of touring, alone, in a Honda Civic. It's not a bad idea if you're really funny and 14. If you're pretty funny and 50, it's an even bigger waste of time than women writing. There is an anger from funny people towards political correctness but it's not a fear of rejection. It's frustration that these pussies have ruined the genre, a sentiment expressed most recently by Joker director Todd Philips.

Oswalt goes on to assume I'm steeped in regret for not staying at Vice. This is a guy who bragged about how easy prescription pills are to get in a comedy special shortly before his wife OD'd on prescription pills--talk about glass houses. Alas, I digress... 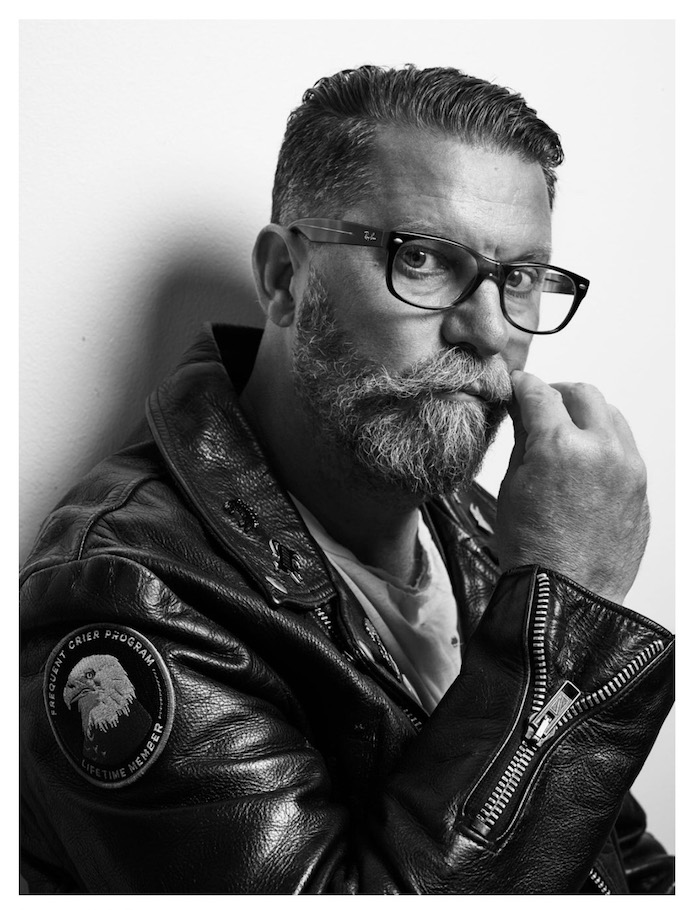 Jill Greenberg photos from the LA Mag article in question

(6) "Gavin wants to be the edgiest guy in the room. But then the ultimate taboo is white identity. He has to touch on that. But then, at the end of the day, he's not ultimately serious." --Richard Spencer

This one made it to the pull quotes. I'm not sure why the left's archenemy, the man behind the meme "punch a Nazi," is now a reliable source. Is he also legitimate when he calls for all blacks to leave America? Spencer was a normal conservative when he hired me for Takimag ten years ago. The alt-right was relatively normal for the next five or six years. Then he dragged it into white nationalism and anti-Semitism. If you want to do an article about a good guy who went awry, Spencer's your guy.

Romano also places Spencer at the DeploraBall; along with Milo and myself, we become some kind of A-Team that represented the Trump movement. In truth, Spencer was banned from the event and waited outside. This is the kind of thing an actual journalist would learn. She also could have mentioned the mob of 500 people who were throwing feces, bottles of urine, and batteries at the attendees. There's also the gas attack that was thwarted by spies from Project Veritas and the hit list provided by antifa that showed who was coming and where to find them. Romano completely ignores the massive wave of violence I was reacting to. In her article antifa don't really exist and the Proud Boys are a mob of brutes who chose to beat people up because...I don't know, multiracial white supremacy?

So anyway, you get the idea. I'm saying awful, hateful things and then hiding behind comedy because I'm a coward. What a retarded theory. In truth, I am sometimes serious, sometimes joking, and sometimes saying something truthful in a satirical way. You know, like everyone on earth, especially funny people. The left can joke about killing the president on a daily basis and it's revolutionary. If we make a snarky comment about fighting back, we're violent. They can assault us with impunity but if we stand our ground we're "aggressive".

The seemingly endless piece ends with "One evening I asked McInnes what happened with his Australian visa, if there was any news. He texted back, 'Still up in the air. Govt facing corruption charges for leaking to the media.' 'You can't be fucking serious,' I texted back. But he was. He always was."

What I said about Australia is 100% true and I could have provided proof if she cared about truth. The, "He always was," is kind of a perfect bookend because this whole thing began with Romano mistakenly asserting I was serious about "gender niggers." This hit piece should be taught in journalism school as a lesson in how not to write.

After receiving backlash for not being mean enough (remember when I said the picture and the headline were deemed too kind?) editor-in-chief Maer Roshan changed the featured photo, title, and sub from: 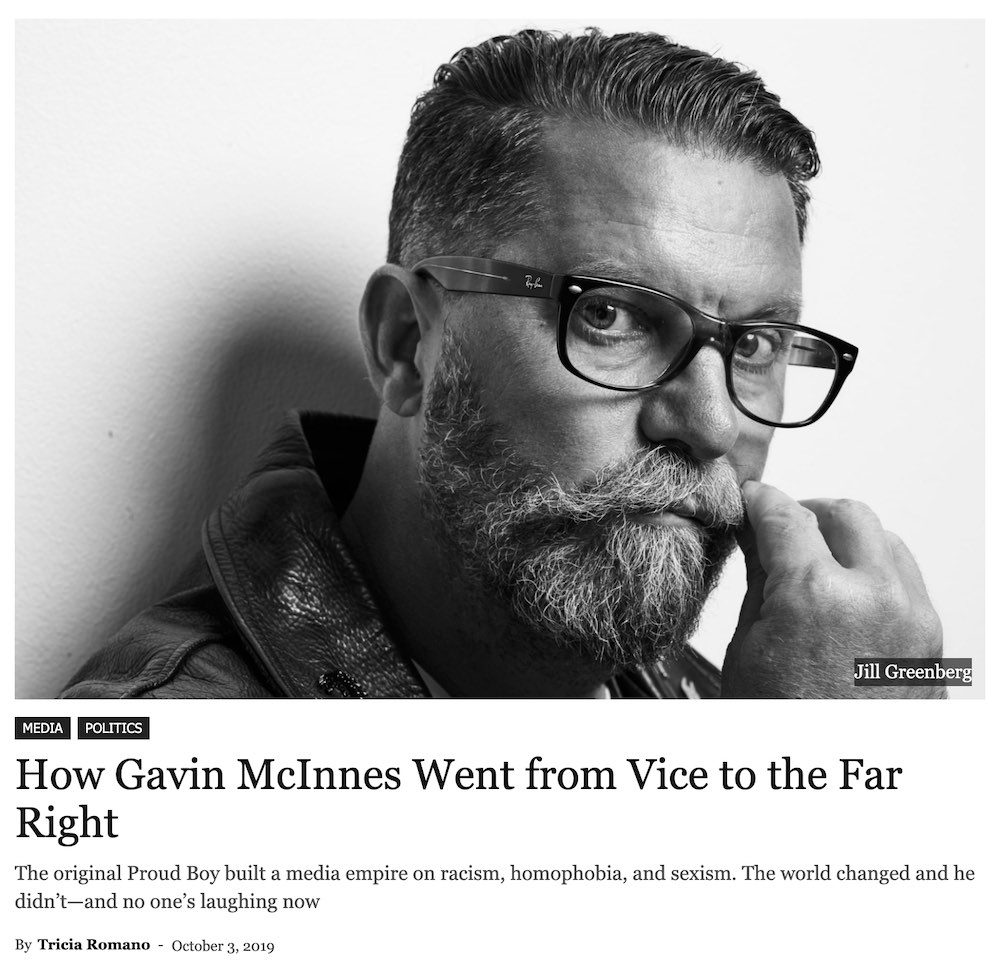 This email is for general inquiries. It is not checked as often as support or other accounts. If you have a pressing issue, it is better to email support.

I understand but still want to send a general inquiry email.

Yes! Mobile apps are available here. Roku and other Smart TV apps are on the way too! We realize that many of you only watch videos on your mobile devices. So we are actively working on features that will help save you data and provide audio-only versions of the videos.

We hear you and we are on it!

Subscriptions are billed on the same day each month (or year if you are on an annual plan). You can cancel at any time by logging in, going into your account settings and hitting cancel. You will still be able to watch content until the end of your billing period, at which point your subscription will be cancelled and you will not be charged again.

You may resume your subscriptions at any time by visiting your account settings.