After spending 15 years on YouTube, posting 155 videos, and
amassing over 30 million views and 350,000 subscribers, Censored.TV host Gavin
McInnes has been banned from the platform.

This follows a multi-year campaign by far-left radicals
painting anybody to the right of Hillary Clinton as a Nazi. Gavin has also been
banned from Facebook, Instagram, Twitter, PayPal, and the entirety of Australia.

In a notice sent to his email provided exclusively to
Censored.TV, YouTube states that he was banned for inciting violence against another
person or group  and creating content that encourages hatred of another person
or group of people. 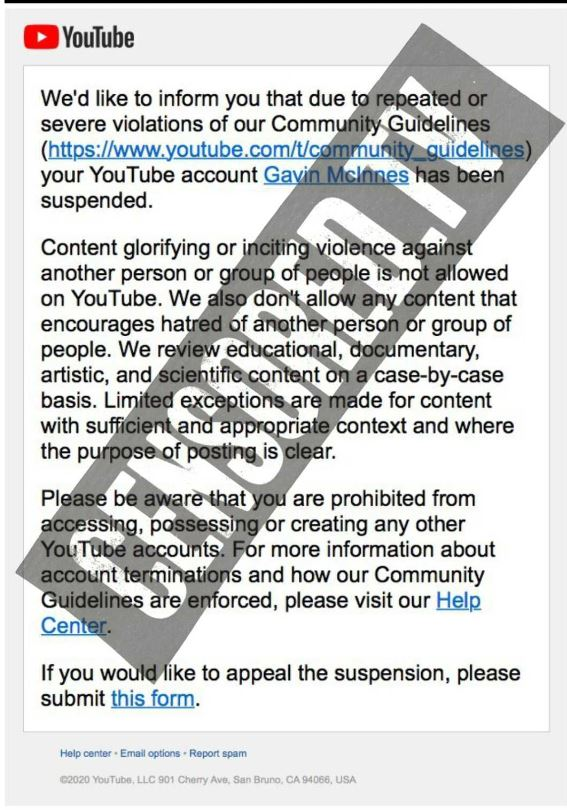 Of course, this is only true to those living in clown world.

His real crime in their eyes was founding the Proud Boys, a
patriotic multiracial mens drinking fraternity that has been the target of hatred from the
radical left. The media claims that Proud Boys defending themselves from Antifa
terrorists is violence, while giving those who initiate the violence a free
pass.

This is proven by the insane jail sentences handed down to John Kinsman and Max Hare, who are spending four years behind bars for a
17-second fight that they didnt even start.

Thankfully, for fans of Gavin, they can still access content
from him on Bitchute,
and by subscribing to Censored.TV for only $10 a month.

He also maintains a presence on Parler,
the free speech alternative to Twitter, along with Telegram.

Speaking to Censored.TV, Gavin McInnes explained how the
attacks against him have increased rapidly in recent days and weeks due to deep
state officials looking to shift blame from left-wing rioters to anybody on the
right:

“They’ve been coming down hard on me this past week. A painter in New Zealand was canceled for painting me. A pizzeria that was feeding cops and low income housing had those programs canceled for appearing on my show – and now this. Someone is very scared of what I plan to do next and I think it’s related to the riots. They’re convinced I’m about to start a civil war. Maybe worry about the people currently burning down your city and stop focusing 100% of your resources on someone who might stop them.”

The cancelling of Gavin began with the actions of the Southern
Poverty Law Center (SPLC), who he is currently suing.

His lawsuit comes in response to the SPLC labeling the Proud
Boys as a hate group.

Since Gavin launched his lawsuit, top-level officials within the
SPLC have stepped down, along with their founder, Morris Dees.

Just a short while before his YouTube ban, Gavin published a video
exposing the SPLC for nefarious activities they have engaged in since their
founding, along with dispelling misleading claims often made about the group,
especially that they took down the Ku Klux Klan.

That video is still live on Bitchute and Censored.TV.

This ban highlights the necessity for President Trump, and those
in power who claim to support free speech, to take the fight to Big Tech.

Sen. Josh Hawley (MO) is pushing to revoke protections within Section 230 of the Communications Decency Act currently granted to platforms
like YouTube, Facebook, and Twitter. Removing those protections would open them
up to lawsuits that they currently are given immunity from.

If these platforms cant stay neutral, there is no reason
they should be given legal immunity from the Federal Government.

Needless to say, Gavin McInnes isnt going away, no matter
what Big Tech does to try to destroy him.