Mainstream and LGBT media remain completely silent on the assault and death of a gay Trump supporter from Rhode Island.

Jesse Ousley, 37, was allegedly assaulted in Fall River, MA on July 8 and later died from injuries sustained. Over the weekend, social media reports flooded in that Ousley had been assaulted because he was wearing a baseball hat in support of President Donald Trump.

Immediately after CensoredTV News reached out to the Fall River Police Department, Police Chief Jeff Cardoza sent a statement to another news outlet, the local Fall River Reporter which, according to a search, had not previously reported on Ousley’s death. Cardoza stated, “In speaking with the detectives involved in the investigation, there was never any mention or evidence of any kind that this involved a MAGA hat. Not sure where that information came from.”

Now, Ousley’s father is speaking out to confirm that his son was wearing a hat in support of President Trump at the time of the assualt. Speaking to activist and Gays4Trump founder Peter Boykin, Ousely’s father wrote:

“I can tell you certain things about what happened to my son but I can’t say too much because of the investigation. Let me start by saying Jesse was a huge Trump supporter and he is gay […] Jesse did leave the hospital that night and was beaten and he did have a MAGA hat on. He died later at his cousin’s house where the paramedics performed CPR and was pronounced dead at Rhode Island Hospital all the information in between and is under investigation pending results from the autopsy. From what I can tell you he had head and chest trauma from being stomped on. Jesse was a great young man who loved life and didn’t deserve to die this way.” 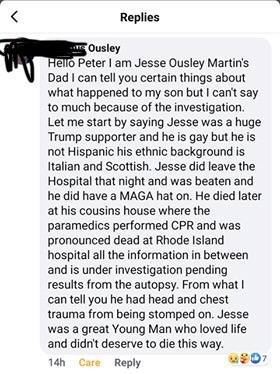 Jesse’s father also clarified that his son was not Hispanic, as earlier reports on social media claimed, but was of Italian and Scotish background. Jesse’s father also appears to verify earlier claims that Jesse had been at the hospital visiting a friend earlier and was attacked as he left.

Jesse’s father contacted Boykin both privately and on a public Facebook page that Boykin runs. Boykin has also been in contact with Jesse’s brother, Zachary. Boykin privately shared messages with CensoredTV News between he and Zachary in which Zachary confirms the Facebook account that contacted him does belong to his father.

While details of the assault remain murky, Ousley’s father confirms several details of the assault that were circling on social media over the weekend. It is unclear if Ousley was murdered because of his Trump hat, which may not have been the traditional, red “MAGA” style. The Fall River Police Department has yet to release further information about the investigation. Ousley, along with his longtime boyfriend, owned a resale shop in Fall River.

Funeral services for Ousley are being held on Tuesday, July 14. Ousley’s remains will be cremated, per his wishes.